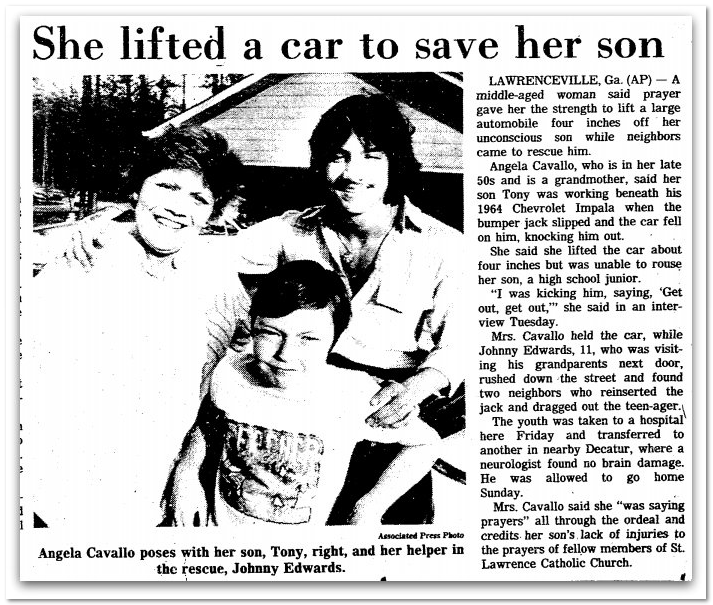 In Aaron Calvert: DECLASSIFIED I push the boundaries of what people are capable of. Without giving too much away, you will witness members of the audience perform the inexplicable in a series of superhuman feats.

DECLASSIFIED takes inspiration from the true stories we’ve all heard about mothers lifting cars and ripping off doors with their bare hands. Whilst training as a doctor these stories were used to demonstrate what the human body is truly capable of and it captured my imagination. What if I could recreate these feats live on stage?

I start DECLASSIFIED recounting the story of Angela Cavallo, you can read the full article as the story was reported here is a more in-depth account…

Angela Cavallo, who still lives in Lawrenceville, Georgia, where the incident happened on April 9, 1982. Her then-teenage son Tony had a 1964 Chevy Impala jacked up in the driveway, he’d removed a rear tire and was working on the suspension. A neighbour kid came to the kitchen door to tell Angela there’d been an accident. She rushed out to find Tony pinned under the car, something had been stuck and in trying to loosen it he’d rocked the car off the jack. Now he was caught in one of the rear wheel wells; all she could see of him was from the waist down.

Shouting to the neighbour kid to get help, Angela grabbed the side of the car with both hands and pulled up with all her strength. The account said she raised the car four inches; she doubts it was that much but believes it was enough to take the pressure off. She recalls nothing about the rescue, but two neighbours reinserted the jack and dragged the boy out. Remarkably Tony recovered with no lasting injuries. Angela, then in her late 50s, guesses she kept the car propped up for five minutes. She describes herself as 5-foot-8, large-framed and strong, but figures she couldn’t have picked the car up under normal circumstances, attributing her feat to adrenaline.

Some may quibble that lifting a car a couple inches is hardly the same as picking it up but she held it suspended for 5 minutes. As a doctor, an adrenaline rush (norepinephrine rush) wouldn’t last five minutes and what we’re seeing here was superhuman strength and endurance in the face of otherwise overwhelming pain.

GILDED BALLOON AT THE MUSEUM